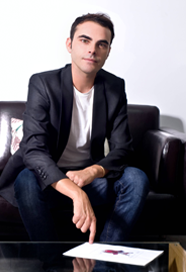 The ION FIZ style can be summarised simply as NATURAL and SOPHISTICATED.

Ion Fiz started his own fashion label in 2002 aged 24. Since then he has been awarded important prizes such as the L’Oreal Paris Cibeles, the Prix de la Mode Marie Claire and the Fad prize for Best Designer. In 2012 he celebrated his tenth anniversary in fashion with a 30-piece couture collection named Fizissimo which was presented in a dramatic catwalk show at the Bilbao Guggenheim museum. Fiz rounded off the celebration of his anniversary with an invited workshop at the Balenciaga museum, where he showed how to make a couture dress.

Ion Fiz studied Fashion Design at the Escuela de Moda Vasca, graduating with honours. He always wanted to be involved in fashion. From a very early age, Fiz learnt how to cut and sew clothes at the workshops of his relatives, who were dressmakers and tailors. Fiz supervises the creative process of each design: from sketches to pattern-cutting to the final cut and finish of each piece.

Fiz has designed several collections for other important couture masters, such as Pertegaz. His clients include Isabel Preysler and similarly elegant women. The collections of the ION FIZ label are distributed in Spain, France, Italy, Russia, Norway, Australia, UAE and Japan. The Mercedes Benz Fashion Week in Madrid and the Pret a Porter in Paris are some of the important events Fiz goes to every season.

Ion Fiz is starting a new phase in his career with a new atelier in Madrid, where he can receive clients wanting bridal and couture creations.

This website uses cookies to improve your experience while you navigate through the website. Out of these, the cookies that are categorized as necessary are stored on your browser as they are essential for the working of basic functionalities of the website. We also use third-party cookies that help us analyze and understand how you use this website. These cookies will be stored in your browser only with your consent. You also have the option to opt-out of these cookies. But opting out of some of these cookies may affect your browsing experience.
Necesarias Siempre activado

Any cookies that may not be particularly necessary for the website to function and is used specifically to collect user personal data via analytics, ads, other embedded contents are termed as non-necessary cookies. It is mandatory to procure user consent prior to running these cookies on your website.